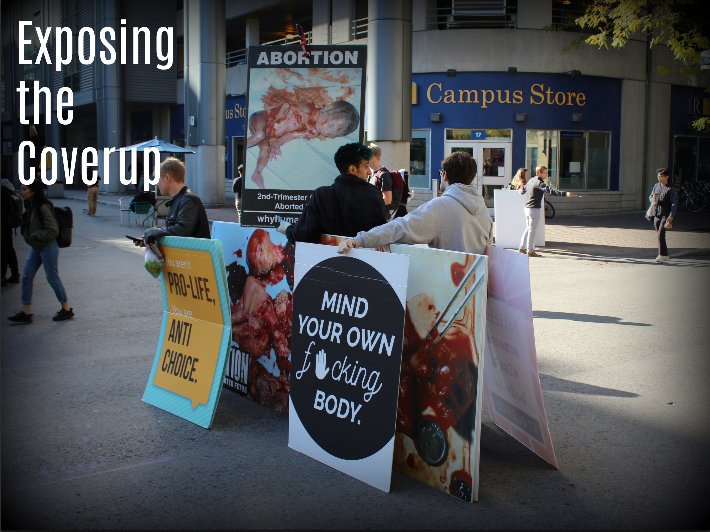 Have you ever heard of the Streisand Effect? The Ryerson Reproductive Justice Collective (RRJC) certainly hasn’t. Their attempt to censor the photos we bring to campus of abortion victims only attracts more attention to the injustice of abortion and the inadequacy of the pro-choice position.

The Streisand Effect is the phenomenon whereby an attempt to hide, remove, or censor a piece of information has the unintended consequence of attracting even more attention to the information. In 2003, photographer Kenneth Adelman was taking photos of the California coastline, hoping to document coastal erosion. Barabara Streisand got upset that an aerial photograph of her Malibu mansion was published in the collection, so she sued. Before the lawsuit, only six people had downloaded the photo — two of whom were her attorneys. In the month after the lawsuit, the photo was downloaded almost half a million times. Oops.

We see the Streisand Effect all the time in our activism at Ryerson. From Day One, the vocal counterprotests from what has become the RRJC have helped to generate campus media attention and make abortion impossible to ignore at Ryerson. I used to keep track of all media coverage of our activism. After we began activism at Ryerson, it quickly became impossible to keep up. Abortion has gone from a settled issue at Ryerson to one of the most hotly debated topics on campus. This is because we have been running weekly anti-abortion activism, but also thanks to the failed attempts of the RRJC to shut us down and cover up the injustice.

(We’ve seen this at U of T as well, with UTSU’s failed attempt to shut the pro-life message out of the street festival, or with counterprotests at George Brown College.) 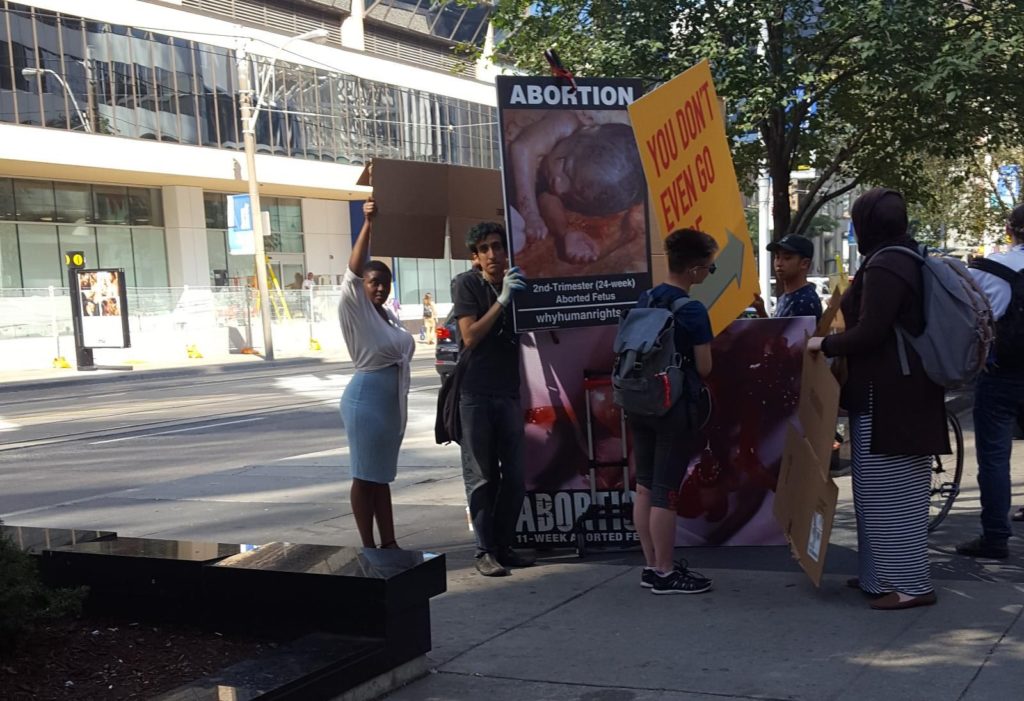 The RRJC‘s one move is to try to cover the photos of abortion victims, even ultrasound photos of healthy children. How do you think this looks to passers-by? We hear from Ryerson students all the time, regardless of their views on abortion, who are bothered by the attempts to censor our message and the inability of the RRJC to defend their own position. How could they? The photos are unanswerable. Who will defend doing this to another human being? 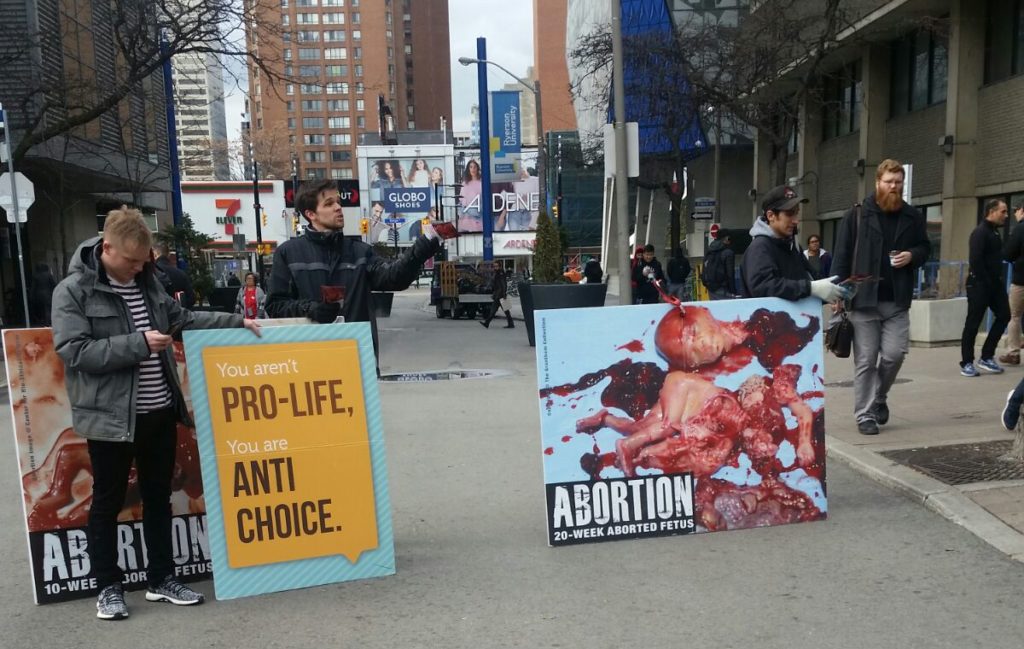 Just last week, I heard fellow TAA activist, Brendan, explain to a group of Ryerson students that we were displaying the photos in order to show that decapitating, dismembering and disembowelling a human being is a human rights violation. An RRJC representative nearby, employed by the Ryerson Students’ Union, defended their attempts to cover up our photos. One of the students asked the RRJC representative why they were trying to censor us and block our message instead of responding to us with a message of their own. Another student said that the RRJC does have an implicit message, that people should control their own bodies. I jumped in and agreed, but pointed out that it’s very difficult for the RRJC to make their stance explicit when their stance is that it’s okay to decapitate, dismember and disembowel another human being’s body.

All they can do is cover up the evidence of the bodies being torn apart by abortion. Even ultrasound photos become intolerable. 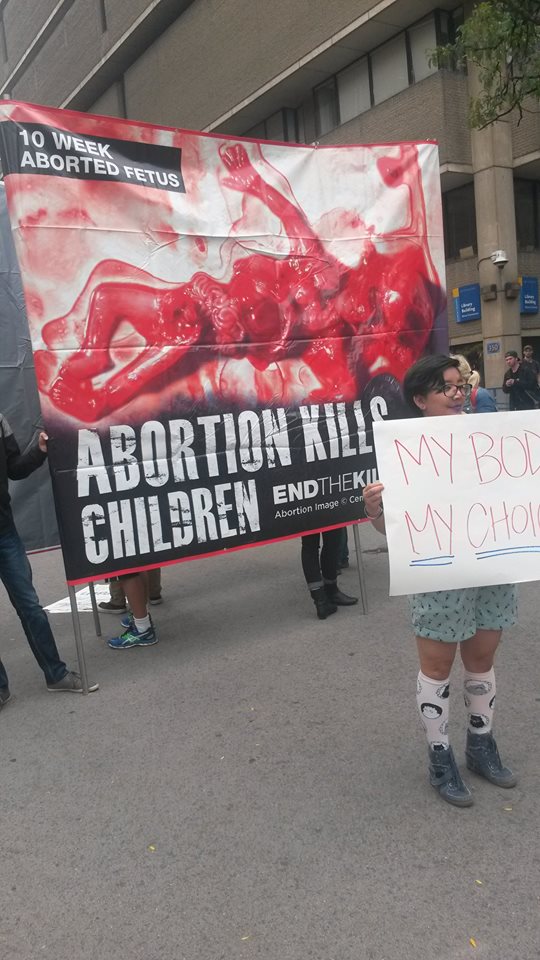 The phrase “my body, my choice” rings hollow next to a photo of another human body brutalized by abortion. Even worse, their sign that says “policing somebody else’s body is violence” looks nothing short of ridiculous next to photographic evidence of the violence that abortion does to the bodies of pre-born children 300 times per day in Canada. From our conversations week by week, it’s clear that many Ryerson students recognize this.

When confronted with the victims of an injustice, it’s been said that we have a choice to be perpetrators, bystanders, or rescuers. Apparently, there’s another choice: we can try to cover it up. That’s not a good look. Would we rather the Ryerson Reproductive Justice Collective not try to censor our message? Of course. But their attempt to cover up photos of abortion victims massively backfires against our strategy. Their censorship presents a tactical speed bump. We can leverage their attempted cover up into a win-win situation: if they don’t block us, we reach tons of Ryerson students with the pro-life message; if they do block us, they attract way more attention to the abortion debate than we could ever do alone. Call it the Ryesand Effect? We just keep following up, week by week, reaching more students, making abortion impossible to ignore and changing hearts and minds, one conversation and one photo at a time. 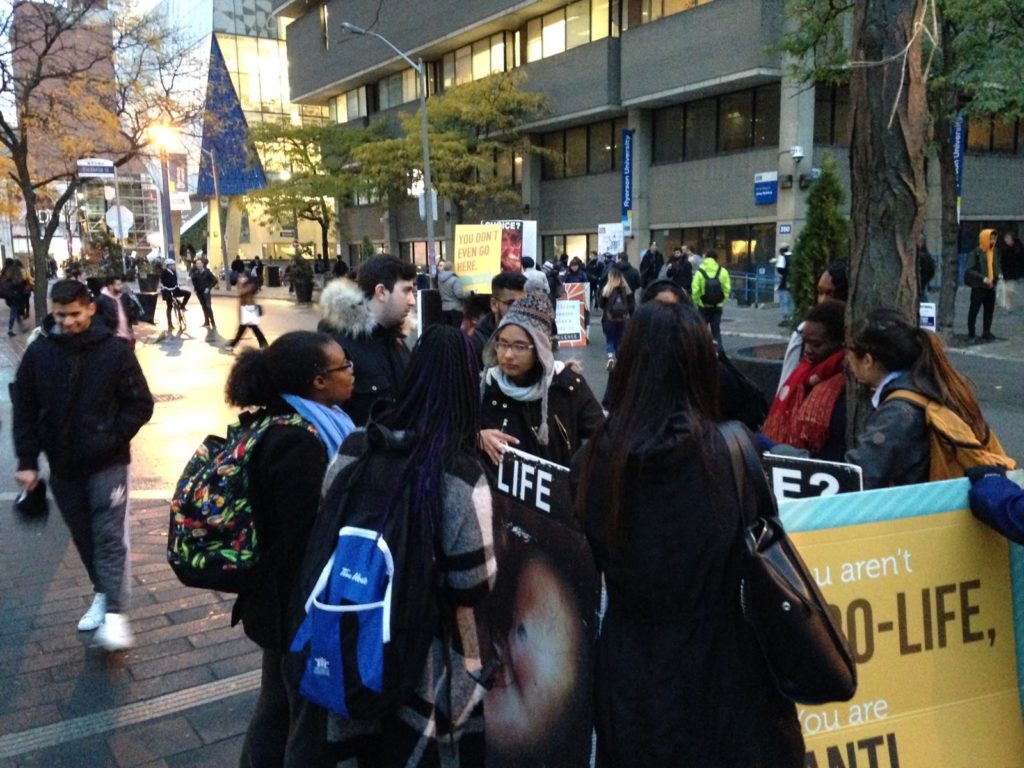 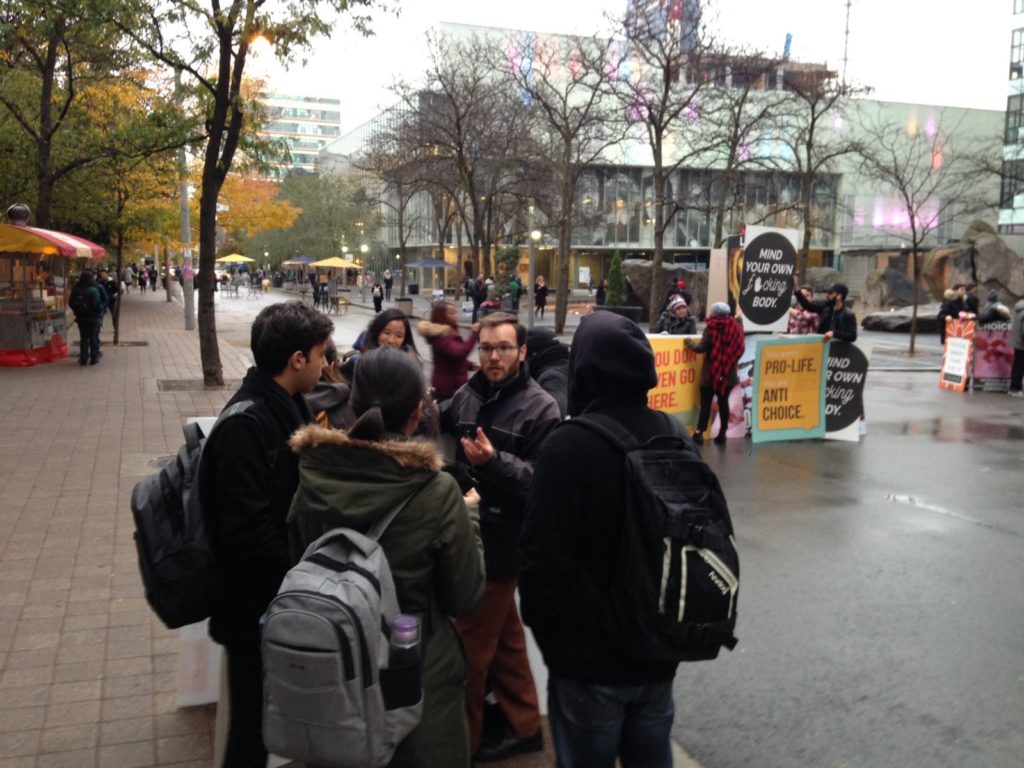