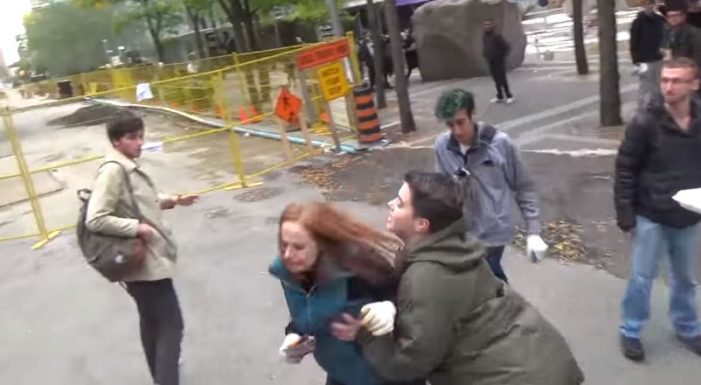 FOR IMMEDIATE RELEASE: Gabriela Skwarko, a pro-choice activist who was arrested for assaulting two pro-life demonstrators at Ryerson University in October 2018, has been sued for $23,000 in damages, along with the Ryerson Students’ Union.

On October 1, 2018, Gabriela Skwarko attacked two members of the Toronto Against Abortion team, Blaise Alleyne and Katie Somers. She attacked them from behind while they were engaged in peaceful and civil discourse with pro-choice counterprotesters, and continued to assault and throw metal objects at the two individuals while observers urged her to stop. With clear video evidence of the incident, Gabriela was arrested by Toronto Police Service and charged with assault and assault with a weapon. She pled guilty to the assault charge in June 2019 and was sentenced to 18 months probation. Ryerson University also fired her from her job at the Office of Social Innovation, and sanctioned her with an eight month suspension, restrictions on communication, and restrictions on access to campus.

“I respect people with different opinions in society and I believe civil discourse is the way to resolve our differences,” said Somers. “I’m disappointed that Ms. Skwarko resorted to violence and caused us harm in this way. It’s shaken my faith in humanity.” Somers suffered physical injury and was diagnosed with PTSD from the attack, and had to take time away from her job to recover.

The Ryerson Students’ Union (RSU), the former student union at Ryerson University, is also named in the claim. The Ryerson Reproductive Justice Collective (RRJC) operates under the umbrella of the RSU. The RRJC has a history of escalating criminal behaviour and violence leading up to the assault by RRJC member, Gabriela Skwarko. Another member of the RRJC attempted to block Gabriela from being filmed during the assault. The RSU is named in the lawsuit for failing to curtail escalating violence and criminal activity among their volunteers, turning a blind eye as the RRJC has celebrated and cultivated a culture of criminal behaviour.

Despite having pled guilty to assault in criminal court, Gabriela Skwarko has denied allegations of assault or battery in the civil lawsuit. Although she is still currently serving her probation sentence, and expressed remorse for her actions in both the Ryerson University and criminal justice system sentencing process, Skwarko now claims in her Defence that she is guilty of no wrongdoing.

“We wish we didn’t have to deal with this,” said Alleyne, who is a part-time student at Ryerson University. “However, with the seriousness of the assault, we’re simply seeking to recover the damages suffered. We hope to never have to deal with this kind of senseless violence in the face of peaceful and civil discourse again.”